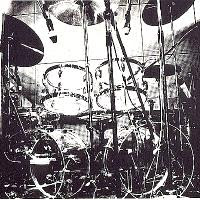 One of their rarest, and best LP's, along with Erna Morena; a great band led by Pierre Courbois that defies the boundaries of rock, prog and jazz...

"What you really have to get hold of is the moving force, the rhythmic tension of rock. Especially the ecstatic element which is basic to all rock rhythms provides a mode of expression which you just can't do without. I think it's clear by now that free jazz is not all that free. The free jazz musicians just threw overboard everything which had been there before but then found themselves with relatively little left to make a fresh start. Only a few of them, for example, made any use of rhythm or really tried to play around with it."

"When I started doing rock", remarked Pierre, "I noticed that there are really only a very few strokes which are played awfully cliché-like all over the world. That's why I have it almost up to here with the whole jazz-rock business. I try to get away from the usual rock clichés... The expression jazz-rock - that's crap."

You tell them, Pierre. Interestingly, this music in many ways sounds more exploratory today than it did when new. That is a devastating, though not at all surprising, commentary on what has happened to music (and other arts) in the period since 1970. Pierre's words are more pertinent today than they were almost thirty years ago.

Over The Moon said...

I'm really digging the Association PC you posted. Great stuff! Many thanks! Please keep up the great work on your blog. It's very much appreciated.

Avoid MAMA KUKU like the plague ! The other albums are all ace , however ! xx

Im looking for "Rock Around the Cock", the second album, from 1973

Really you have done great job,There are may person searching about that now they will find enough resources by your post.I like this blog..
Blogger how when you visit my site,
My Site created for men's health,
Here the best method for you and get the best Penis Enlargement Pills today.

I think everybody should glance at this.
sixflags over texas | maui wedding packages | forensic psychology

RapidShare says "File Not Found". Could you upload it once again? Thanks in advance.