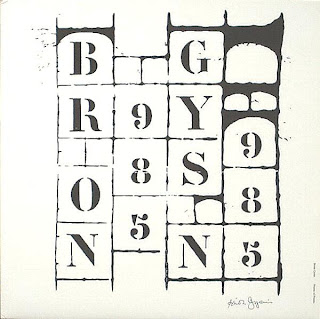 T: Who produced the "Poem of Poems" through the tape recorder?
The text in The Third Mind is ambiguous.
Brion: I did. I made it to show Burroughs how, possibly, to use it. William
did not yet have a tape recorder. First, I had "accidentally" used
"pisspoor material,"fragments cut out of the press which I shored up
to make new and original texts, unexpectedly. Then, William had
used his own highly volatile material, his own inimitable texts which
he submitted to cuts, unkind cuts, of the sort that Gregory Corso felt
unacceptable to his own delicate "poesy." William was always the
toughest of the lot. Nothing ever fazed him. So I suggested to William
that we should use only the best, only the high-charged material:
King James' translation of the Song of Songs of Solomon, Eliot's
translation of Anabase by St. John Perse, Shakespeare's sugar'd
Sonnets and a few lines from The Doors of Perception by Aldous
Huxley about his mescaline experiences.

Very soon after that, Burroughs was busy punching to death a series
of cheap Japanese plastic tape recorders, to which he applied himself
with such force that he could punch one of them to death inside a
matter of weeks, days even. At the same time he was punching his
way through a number of equally cheap plastic typewriters, using
two very stiff forefingers . . . with enormous force. He could punch a
machine into oblivion. That period in the Beat Hotel is best illustrated
by that photo of William, wearing a suit and tie as always, sitting
back at this table in a very dingy room. On the wall hangs a nest of
three wire trays for correspndence which I gave him to sort out his
cut-up pages. Later, this proliferated into a maze of filing cases filling
a room with manuscripts cross-referenced in a way only Burroughs
could work his way through, more by magic dowsing than by any
logical system. how could there be any? This was a magic practice he
was up to, surprising the very springs of creative imagination at
their source. I remember him muttering that his manuscripts were
multiplying and reproducing themselves like virus at work. It was all
he could do to keep up with them. Those years sloughed off one
whole Burroughs archive whose catalogue alone is a volume of 350
pages. Since then several tons of Burroughs papers have been moved
to the Burroughs Communication Centre in Lawrence, Kansas. And he
is still at it.

Wow, I'd basically given up on the idea of ever hearing these records. Thanks very much for this and the other Gysin post, very fine stuff here.
~zmg