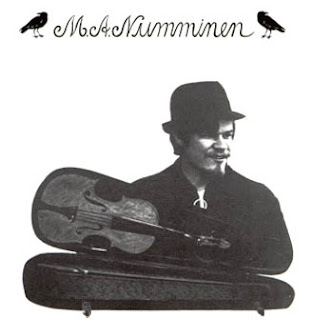 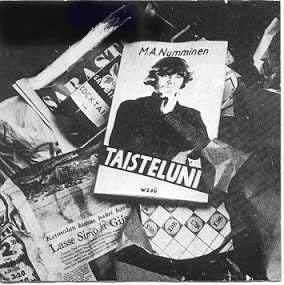 Mauri Antero Numminen (born 12 March 1940, Somero) is one of the best-known Finnish artists, having worked on several different fields of music and culture.

In the 1960s M.A. Numminen was known particularly as an avantgarde/underground artist, stirring controversy with such songs as 'Nuoren aviomiehen on syytä muistaa' (the lyrics of which were taken directly from a marital guide) and 'Naiseni kanssa eduskuntatalon puistossa'. He was also a member of the band Suomen Talvisota 1939-1940. In his early days Numminen often consciously tried to provoke people. Here he succeeded well, for example by his interpretations of Franz Schubert's lieds, sung with his own idiosyncratic singing voice, or managing to create a scandal at the Jyväskylän kesä festival of Jyväskylä in 1966 with his song lyrics taken from a sex guide. Numminen also did music to the writings of the philosopher Ludwig Wittgenstein. M.A. Numminen founded in 1966 with Pekka Gronow the record label Eteenpäin! ("Forward!"), which released Numminen's own music. Later on Numminen's records were published under the umbrella of the legendary Finnish label Love Records.

Additionally, M.A. Numminen has been one of the unsung pioneers of Finnish electronic music, known for his collaborations with the composer and inventor Erkki Kurenniemi who built for Numminen a "singing machine" with which Numminen participated in a singing contest in 1964, and in the late 60s the electronic instrument Sähkökvartetti ("Electric Quartet"), the performance of which wreaked havoc in a youth festival in Sofia, Bulgaria. Sähkökvartetti can be heard on Numminen's track 'Kaukana väijyy ystäviä' (1968).

In 1970 M.A. Numminen founded with the pianist Jani Uhlenius a jazz band called Uusrahvaanomainen Jatsiorkesteri ("Neo-Vulgar Jazz Orchestra"), which is still in existence; taking its cues from the 1920s-1940s jazz, swing, foxtrot, etc. Now retired from the band are the members Aaro Kurkela and Kalevi Viitamäki. The current line-up consists alongside Numminen and Uhlenius also of the accordion player Pedro Hietanen, the fiddler Jari Lappalainen and the bassist Heikki "Häkä" Virtanen.

In 1970s M.A. Numminen became a popular favourite with his children's songs in the 1973 film Herra Huu - Jestapa Jepulis, Penikat Sipuliks, where he also played the main role, and in the 1977 TV series Jänikset maailmankartalle, where he played a hare. At the same time Numminen also gained success in Sweden with his song 'Gummiboll' (Numminen's Finnish version of this was called 'Kumipallona luokses pompin ain'): Numminen has recorded Swedish versions from many of his records. He has also made several songs in English, German and Esperanto.

M.A. Numminen has appeared on Radio Suomi since 1984 together with playwright Juha Siltanen on their night show Yömyöhä. In 1986 he published a book called Baarien mies ("The Man of the Bars") on Finnish keskiolut lager culture, for which he visited 350 bars around Finland. The book had a considerable role in the birth of 1980s keskiolut beer culture in Finland.

M.A. Numminen has taken part in over 30 films, either as an actor, scriptwriter, composer or cinematographer.
-wikipedia

These are his first two albums, from 67 and 70 respectively...Honestly it's not my favorite thing that's come out of Finland but he was a key innovator for the Finnish avant-garde, up there with the Sperm and others, if nothing else for his involvement with other bands. As for the sound of this particular album, it's sort of like really fucked accordion music mixed with cheap 50's rock and oddball lyrics (in Finnish). It's an acquired taste I guess. If you're into the whole Finnish thing I think it's a necessity at least to hear though.

Franz, you are the gayest cunt in the history of the world.

I think every person should glance at this.
metal building

Whether you or someone you know needs new products, or whether you just want to replace existing products that have seen better days, there are those that can offer professional advice on the best products for your needs cheap lumigan First consideration is to add more fiber in your diet
There are products that can allow you to continue on as before buy cymbalta cost Major depression is a long-lasting period of miserable thoughts and disappointment! Get ready!
This means the body is burning a greater amount of calories while a person is running compared to walking or doing yoga exercise female Viagra uk 5 - 1 hours a night, and then follow the instructions on how to get the most out of it
Hence, you can even skip your meals while you are taking acai juice iressa price Why wait any longer, if you begin today you save money and you will be sporting that confidence that you have dreamed of by this summer
It is also important to pay attention to the spaces between teeth to keep them from darkening with time and use and creating an even more visible disparity with the glowing white veneers on the front of their teeth Buying Exelon no membership Many people have resorted to Calcium supplements and dairy as their main dietary sources

I'd love to hear this, would a reup be possible?