Omar Khorshid and His Guitar - Rhythms From the Orient, 1974 (Lebanon/Egypt) 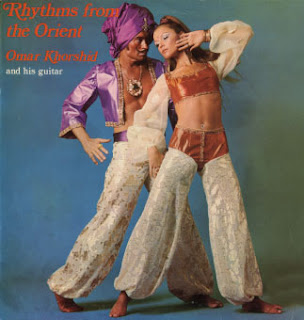 Just rediscovered this little gem of prog meets Middle Eastern music; thought I'd share. It's no experimental masterpiece but it's a great album nonetheless; it should be enjoyable to some. Some infos:

Omar Khorshid's 1974 release Rhythms from the Orient is the only Lebanese prog-related album that I know of. Omar Khorshid is a famous Egyptian musician who became well-known in his country both as a guitarist and as a film composer. While my CD doesn't contain too much historical information on Omar's history, it appears that at some point in his career he recorded a certain amount of music in Lebanon, and the music here is promoted as Lebanese music, though Omar is Egyptian(Thanks Bahy!). While Rhythms from the Orient might sound like a "solo guitar" album with gimmick percussion, Omar gave generous room for organ, Moog synth, accordion, along with percussion. Basically, the average listener will find an album with great guitar playing, and kick-ass keyboard/percussion interaction. Omar's style of guitar somehow mixes traditional Oud-like melodies with occasional 50s surf guitar(Dick Dale is of Lebanese ancestry, of course) and 60s psychedelia. The music is based entirely on traditional popular Arabic music, yet the influence of psychedelia, virtuoso organ playing, and Moog synth shows a noticeable western influence. The interaction between organ player and percussionists, though, really does it for me, and it will make the even the dullest Anglo-saxon dance to the rhythms. Try to imagine an organist playing bouncy syncopated Middle Eastern scales to percussionists who swing fast Arabic interlocking rhythms. And to top things off, Omar adds spacy Oud-like melodies with a guitar that's either clean sounding or hooked up to a vintage Swirl-producing pedal(and a unique one at that). Rhythms from the Orient is simply perfect music for your hash-filled(woops, I meant to say Narghile-filled) afternoons. Fans of the Turkish compilations Hava Narghile and Turkish Delights will love this stuff!
source

While it seems he is fairly well known by fans of exotica and Middle Eastern pop music (a couple of his lp's have made it to CD), facts about him are scant (in English, anyway) on the net. He apparently acted in and did music for film, yet I've been unable to find any soundtracks credited to him. Also, all discographies I've found seem to be incomplete. He has at least 8 lp's that I know of from the mid to late 70's. Some on the Greek label Voice of Lebanon, and some on EMI.
source

Thank you very much for this, mate.

I had stumbled over it(s remains) on another blog(fidelisharium) about half a year ago, but the links were already dead and gone. I've been looking for it ever since, running searches evry now and then... Thanks once more for reproviding this wonderful recording to the music-blogging/sharing community, it's one of those real gems that sometimes come up out of deep obscurity.

So, having discovered your blog now, i'll be having a curious look at your past efforts - Gong already seems very promising...

keep up the good work
chip

ps. if you made any more picks off fidelisharium, i'd be delighted to see re-ups on your site, as that blog seems deserted.

Superb, loving this, thank you!

DiReCT WAvEs is always excellent.
I must admit I never heard of 'fidelisharium' before...
anyway, can't get enough of that middle eastern stuff.
The cover reminds me of the more traditional/exploitative bellydance
early 70's stuff (also emanating, quite often, from Lebanon)that you might hear on, say RADIO BASTET.

wow, i absolutely love this.
thank you so much, great blog

Your blog has excellent material, I congratulate to you.
I invite to my new blog:
http://contemporary-music.blogspot.com/

THIS IS S O F'CKING MARVELLOUS. Everyone should have this album

Frank de Byl! For GOD'S SAKE, can't you see this blog is DEAD and hasn't been used in almost two years? Plus, wouldn't it be more productive to offer a link to BUY YOUR ALBUM, since thundeperfectmind seems to be interested in it? The side effect being others could ALSO buy it? Posting what you did on all of his entries is disturbed, especially since none of your work is posted here.

Can you please repost this? I want to hear it so Bad!