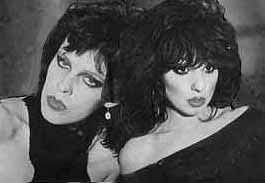 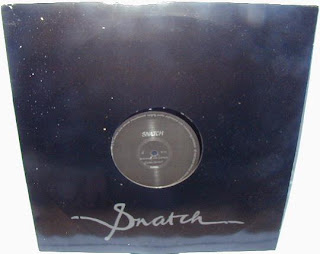 Great no-wave related group that collaborated with Brian Eno at some point or another...The thing of interest here to NWW List collectors is the EP, as the tracks on the EP are more experimental, jumping from weird funk/blues to punk rock to proto-techno from track to track. The EP was released on Fetish records, who put out other great records by 8 Eyed Spy, z'ev, and others. Note that the versions of the tracks that appear on both the EP and LP are completely different.

Red Army is quite possibly my favorite proto-techno track released in any decade, even including Tolerance and other obscure greats.

Snatch were originally if the News of The World was to be believed going to be called Cho-Cha before the sexually ambiguous name of Snatch was settled on. Snatch was Patti Palladin and Judy Nylon, a pair of US expatriates:

Live Speakeasy 1977
"I met Judy on the phone. I was having a transatlantic conversation on the phone with a friend in London. I was in NY at the time, and Judy was in his studio. When I came to London in about '74 we became good friends. We were trying our best to get something going, we were both creative chicks... We both had ideas of sorts.

For 2 foreign chicks living in London, what is there really to do? So that's why Rock & Roll! It was the obvious thing to do out of boredom. We thought about forming a band together. We worked on basic lyrics and melodies and things. But it was hard trying to find people who understood where we were coming from. At that time all the punks were suddenly beginning to appear. Everyone was into saying, "I'm a punk. I'm cool, I'm aggressive, we're going to change it" and all this shit. " John Savage Interview. Search & Destroy #8

They certainly had a refreshingly blasé attitude to the rock'n'roll business. Sporadic gigs and sporadic singles when they felt the need spanning from 1976-80 and a collaboration on a Brian Eno single. They even reached #54 in the charts with All I Want but made no effort to cash in. Both Judy and Patti were strong willed and committed individuals who never exploited their sexuality or the music industry they found themselves in unlike most of their punk contemporaries of the time. It was all on their terms.

Snatch was never a permanent set up. In fact it was really a collaboration between Patti, Judy and whoever else. Eventually they went their separate ways. Both are still recording and in the arts to this day.

Get the EP
Posted by thunderperfectmind at 7:26 PM

I have been looking for this LP for years.

You are a superstar

i cant get the download to work!!!!!ive been after this lp for years and i`m totally upset.if any of you people have downloaded it and would do me a trade or somehow help me out with this i`d be much obliged!!

heres my email address
adamhenryhourican@yahoo.co.uk
(pretty please with a cherry on top!!)

ok,ive now got it!!thanks for posting this very hard to come by cd.its a masterpiece!!
i`m sure patti`d be happy that you posted it!!
the hurricane

Great album but surely you've just ripped the text from here without credit?

Generic Viagra (sildenafil citrate; brand names include: Aphrodil / Edegra / Erasmo / Penegra / Revatio / Supra / Zwagra) is an effective treatment for erectile dysfunction regardless of the cause or duration of the problem or the age of the patient.
Sildenafil Citrate is the active ingredient used to treat erectile dysfunction (impotence) in men. It can help men who have erectile dysfunction get and sustain an erection when they are sexually excited.
Generic Viagra is manufactured in accordance with World Health Organization standards and guidelines (WHO-GMP). Also you can find on our sites.
Generic [url=http://viagra.wilantion.ru]Viagra 100mg pills[/url] is made with thorough reverse engineering for the sildenafil citrate molecule - a totally different process of making sildenafil and its reaction. That is why it takes effect in 15 minutes compared to other drugs which take 30-40 minutes to take effect.
[b]buy viagra australian
how to get viagra illegaly
resonably priced viagra without a prescription
Pulmonary Viagra
Palin Viagra
denny's restrautant in trouble over viagra
Buy Viagra Without Prescription In Australia
[/b]
Even in the most sexually liberated and self-satisfied of nations, many people still yearn to burn more, to feel ready for bedding no matter what the clock says and to desire their partner of 23 years as much as they did when their love was brand new.
The market is saturated with books on how to revive a flagging libido or spice up monotonous sex, and sex therapists say “lack of desire” is one of the most common complaints they hear from patients, particularly women.

I think everyone must read this.