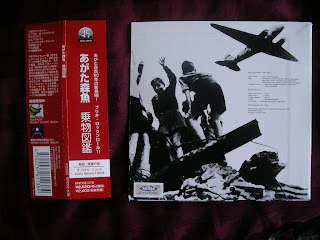 This is the fifth release from the Japanese Vanity label. It's one of the few from the label that's been reissued on CD (the only other being the Aunt Sally) but I can't find a place that even has this reissue available, including Morio's own website, so I feel it's fair game to upload.

Agata Morio, as I understand it, is fairly well known in Japan as being a Japanese folk artist with a sometimes experimental edge. I've heard nothing of his other work, but from what people tell me this is pretty distinct from the rest of his albums, and it's easy to see why: there are very few, if any, folk leanings on this album at all. In fact, it has more in common with synth pop, new wave, minimal electronics and the like than it does with Japanese folk-rock. That being said, it's pretty pop-based, and is probably the most accessible Vanity release after the Aunt Sally one, but it still has its experimental moments, verging into ambient and musique concret every now and then, and there are some non-electronic tracks as well. At any rate, it's another vital piece to the Vanity puzzle, and it's also very enjoyable. The booklet that comes with it is all in Japanese, so I can't reveal any of the information inside of it, including track titles...However on the back cover are a few English credits, including, notably, mentions to SAB and Phew (also from Vanity). They are:

Despite its pop leanings I feel this album should appeal to people interested in the other Vanity records anyway. The best comparison of it's sound I can think of would be an Aunt Sally with synthesizers mixed with BGM or RNAO, but that's just a generalization of course. The last track in particular sounds like it could have fit well into the SAB LP or the second side of Normal Brain if you allow for a bit of leeway.

Get it here
Posted by thunderperfectmind at 12:56 PM

Over The Moon said...

Thanks a lot for this. The link below has the track titles in English:

he recently posted the decayes album ten guitars, along with a bunch of othe great gems further back in the posts

Thanks a lot for all these gems!
Any chance to get the BGM vanity record?
Keep up the good work.

OTM and isaac - thank you!

jan voot - atlantis has actually already posted the BGM lp, along with the normal brain, RNAO and SAB records. you can view his blog here http://atlantisaudioarchive.blogspot.com
he's uploaded a bunch of other great stuff too, check it out.
also, if you're not already aware, mutantsounds has put up the sympathy nervous, aunt sally and a couple other vanity items.

this is just a general comment: the only vanity record that hasn't been uploaded is dada's jyo. (and, of course, all the flexi-discs and cassettes and the like, which we'd all love to hear if anyone has them)

In the least, it isn't shockingly good -- making it the worst Vanity release I've yet heard (got all major LPs on the harddrive, own 1 LP).

That said, it has its moments. But when the aching pop moments creep in, it's really bad, like "Vanity, why!" bad. It's hard to defend the release of this on such a consistently amazing experimental label. Alas, it doesn't take away from the brilliance of the other individual releases..

One place where the CD is available from is the Improvised Music from Japan shop:
http://www.japanimprov.com/cdshop2/index.html

Look under Japanese labels, then Bridge.

thanks for the record.

i noticed that the bass line on the third track, "submarine," sounds almost EXACTLY like joy division's "she lost control."

unknown pleasures also came out in 1979. i'm really curious about this...

Hi I am like 13 yr old & Blonde, and I love guitar and Eric Clapton for an old guy and John Mayer is neat, he's so cutie pie.
Also...I just had to tell everyone that!! I went to a rock show and saw GW Williams Friday. he was the bestest ever.I am so in love with an older guitar man.ok so he doesn't know,but I have a crush on GW Williams.
I got his press release here
Part of him Press Release Is down Below
________________________
Friday evening,I attended the GW Williams,Rock & Blues guitar concert in Seattle I couldn't believe what GW Williams did, neither could 113,473 other people in attendance, GW Williams and his Rock n Roll & jazzy blues guitar style ,along with his Elvis like singing voice may have opened a whole new world of music,maybe a new style was born last Friday night.Rock,Blues,Jazz Guitarist GW Williams Gets 45 minute Standing Ovation IN Seattle Concert

Yes if the truth be known, in some moments I can bruit about that I approve of with you, but you may be in the light of other options.
to the article there is even now a question as you did in the fall delivery of this beg www.google.com/ie?as_q=dvd dumper 2.0 ?
I noticed the catch-phrase you procure not used. Or you use the black methods of development of the resource. I possess a week and do necheg

oZzy moved away earlier, I miss his cock, and I'm always hungry for intercourse.
FUCK MY PUSSY!

Look at my page :: hcg injections