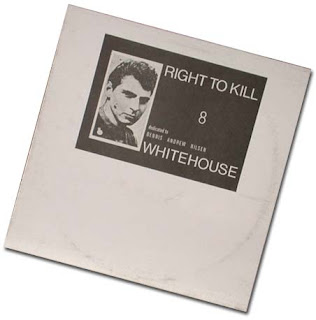 This is one of only two Whitehouse records that have never been released (supposedly because the original tapes were lost and Bennett didn't want to release them in the quality they would be in if they were directly ripped from vinyl). This one was only released in 200 copies, so luckily someone did rip it from vinyl, so it's available nonetheless. Psychopathia Sexualis was the other LP that has not been reissued (for the same reason). Apparently this is the rarest/most sought after Whitehouse LP.

Thank you very much for uploading this! Have seen Whitehouse in Cologne Germany once, which was quite a thorough experience. It´s impressive how consistent they follow their style in music, appearance and lyrics/text.
Recommended!

This is great. Heard it before, naturally, since I'm a huge Whitehouse guy. Hopefully you won't get a letter from Susan Lawly. I posted Bird Seed on mine once and it was in less than a week that I got threatened if I didn't take it down, and I'm not going to take threats lightly from guys who make music like they do, you know?

^ that was me...i just restarted my once defunct blog.

Sorry, I missed the file. Any chance of reposting it?

I missed the file too, and I was so happy I saw it..Repost please

Damn, I am sooo late! Any chance someone might have that file that I could upload?

Stunning story there. What happened after?
Good luck!

Hi, I desire to subscribe for this blog to take
newest updates, thus where can i do it please help out.

Terrific post however I was wondering if you could write a litte more
on this topic? I'd be very thankful if you could elaborate a little bit further. Thank you!

Do you mind if I quote a few of your articles as long as I provide credit
and sources back to your website? My blog site is in the very same area of interest as
yours and my visitors would really benefit from some of the information you provide here.
Please let me know if this okay with you. Thanks!