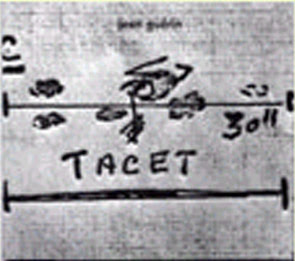 Another electronic gem from Futura...Info is almost nonexistant but I think these reviews from rateyourmusic sum it up nicely:

This album is psychedelic like an LSD trip. The music is atonal, a mix of acoustic instruments such as trumpet, saxophone, double bass, voices, strings, and absolutely stunning electronic sounds, echo, reverb, underwater bubbling sounds, even grooves (the otherworldly opening track!). The whole music sits uniquely between Jazz – that is, Free Jazz – and avant-garde concert music. One would expect the first generation synthesizers to sound dated - not so, they would still be the right choice if the album had been recorded only recently. Tacet is futuristic, surreal, an ultimately indescribable musical experience, an essential album for anybody interested in new sonic worlds.

Where had this album been all these years?! Why hadn´t I come across this before?
One reason is, Tacet had been the soundtrack of some obscure French movie (by Claude Faraldo) called Bof, anatomie d'un livreur and released in 1971 on Futura, a small French indie label. Another is that Tacet was far too strange for the masses, still is, and possibly Jean Guerin ran out of energy after witnessing how this enormous achievement went unnoticed.
Jean Guerin is a drummer and like that other drummer Robert Wyatt, capable of cooking up the strangest kind of music. Musically, there aren´t any similarities between those two beyond the `strangeness´ factor. The music on Tacet is much more closely related to Herbie Hancock´s Mwandishi sextet - not rhythmically but sonically; incidentally, Patrick Gleason participated in the recordings of Tacet. One can imagine Gleason to have played this recent recording to Herbie Hancock before they went to the studio to record Herbie´s new music. Tacet was recorded before Hancock´s Mwandishi albums! It doesn´t make those LPs less spectacular, but somehow it puts things in a different light. I had always thought that Herbie had been the pioneer launching himself and me into a musical parallel universe with Mwandishi, Crossings and Sextant, and nobody followed on that path, not even Herbie himself - with Headhunters, Herbie returned to planet Earth. Only Miles Davis and Weather Report occasionally recorded some kind of psychedelic Jazz and only for a short time: Miles went silent in ´75 and Weather Report went into fusion and that was that. German psychedelica such as Tangerine Dream, Popol Vuh or Klaus Schulze pale into insignificance by comparison to Tacet.

Tacet has been re-released in 2001 on the Italian label Elica (ELICA 3560) and includes English liner notes. Make sure you get this “movie inside your head” before it becomes out of print and forgotten or a myth - again.

If you want truly unique music, this is it!

Yep, it's weird alright. Nothing quite like it - the closest comparison I can come up with is the free-jazz-in-a-reverberating-echo-chamber sound of Sun Ra's Cosmic Tones for Mental Therapy combined with the extraterrestrial electronic experiments of Pierre Henry's Messe pour le temps présent, throw in some absurdist vocals, and ... I don't know. It's so odd. But then in all comes together in an entrancing future-primitive vibe, with bubbling water sounds, mysterious echoey effects and hypnotic rhythms (and non-rhythms). Perfect music for taking mushrooms on a rainy afternoon, watching the raindrops melt into asphalt, and then performing expressionistic modern dance moves in your undies. (Ha! And how do you spend your weekends?)

Please use a more friendly service like mediafire instead of rapidshare.

HELLO. IT WAS NICE TO SEE THE TACET ALBUM POSTED WITH SOME GREAT COMMENTS ON YOUR EXCELLENT BLOG, BUT SINCE, AS YOU KINDLY MENTION, WE REISSUED THE ALBUM AND IT IS STILL AVAILABLE, I WOULDN'T MIND IF IT COULD BE REMOVED. I HOPE YOU UNDERSTAND AND THANKS FOR YOUR CONSIDERATION. ANDREA/ELICA

I just watched Le Planete Sauvage (Fantastic Planet), 1973, which has sound effects by Jean Guérin. The movie soundtrack is very good, so while looking for some more, I found this post. There is this one piece of the movie that caught my attention for probably inspiring Daft Punk's burnin (Homework, 1996).

This cannot have effect in actual fact, that is what I think.
steel buildings