Hidalgo was a leading figure of the Spanish avant-garde from the NWW List, who worked with sound poetry, prepared instruments and various other extensions. Of these two albums, Rrose Selavy is probably more relative to the List than Tamaran is, but they're both worth hearing.

Rrose Selavy is a simple yet brilliant piece of progressive minimalism in which a new repetitive rhythm is brought in by a new instrument every track - essentially, you're hearing the same piece over and over, just more complex each time until it reaches its cacophonous conclusion after six tracks. It's incredibly simplistic in idea but it's actually a surprisingly original listen. This is obviously dedicated to Duchamp and is littered with references to him; it's not totally unlikely that this was inspired by Erratum Musicale or similar pieces.

Tamaran is compeletly different and I know little about it other than it is essentially a piece for twelve prepared pianos. Excerpts from this are occasionally found on Fluxus compilations or similar. One of the performers happens to be Walter Marchetti, another interesting Cramps-related composer in his own right. Quite the ridiculous cover art, too... 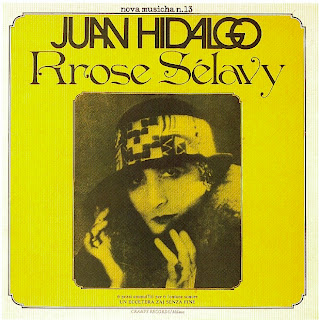 I found very limited information on the internet about developing applications for iPhone. I guess people can make applications with the use of visual interface and no raw coding, I know some HTML codes as I maintain some websites at work. I have never done any programming work before for making applications. If the answer is no, should I learn some programming languages first before making the applications for iPhone?
[url=http://www.nexus-software.net/syntezatory/forum/index.php?action=vthread&forum=4&topic=6&page=10400#msg380570]unlock iphone[/url]

Maybe you will want to see my ?
Computer Mirror Image: "THE BLUE BUTTERFLY IS 33YO NOW"