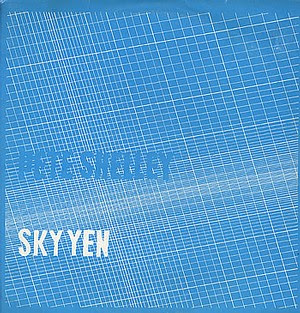 Vinyl 12 inch LP released in March 1980 in an edition of 1000.
Recorded in March 1974 and performed on a purpose built oscillator.

Long forgotten is the first solo release from Buzzcocks lead vocalist and songwriter. 'Sky Yen' was recorded six years before it was released for the purpose of supporting a film by Howard Devoto. The soundtrack was released by Shelley on his own label (Groovy records) during the time that Buzzcocks were becoming more angst ridden, abrasive and less 'pop'. This was a period when the band were experimenting with sound (Martin Hannett's 'tin' production on their final parts 1-3 singles) and concepts (shapes defining sides of singles rather than letters).

The Groovy records label released very few recordings. Those that came out included an LP '£3.33' (which was also the retail price) by 'Free Agents' (a loosely based group of musicians including Eric Random, Barry Adamson and Francis Cookson), a surrealist film soundtrack album called 'Hangahar' by Sally Smmit (Sally Timms) and Lindsay Lee, and 'Sky Yen' itself. The label operated in parallel with New Hormones records in central Manchester, UK, and was linked to the Secret Public (name given to Buzzcocks appreciation society and mail outs) whose staff and cohorts included Jon Savage and Linder Sterling (Ludus).

'Sky Yen' is one piece - split over two sides at 33rpm. The instrumentation is solely oscillator based with the device altering pitch and timbre throughout the recording. The modular sound often builds into layers. During the session listening to this record again, I've come to realise, even with the intense sound, that it is not a painful process, as the sound emitting gravitates between low and high end frequencies without any motivation for sonic weaponry on the agenda. Whether this was the idea, I'm not sure....but the production sound suggests otherwise. Sometimes the oscillations even produce rhythmical pulses which add new dimensions in places. However, that's not to suggest in any way that the piece develops a popular form. On the contrary, any anchors that seem to appear are quickly changed or drowned out by more oscillations. The composition remains in a state of flux throughout the duration.

If there is one criticism about the record, it is that Shelley put too many twists and turns into the piece, often making it sound cluttered and wayward. It works better when the pace is slowed to allow resonances to develop. This happens mainly on side two.

Comparisons with other artists would include John Cage and even Whitehouse, but having said that, the piece does remind myself of the more experimental elements of early Kraftwerk (i.e. Von Himmel Hoch) and Neu (opening 10 secs or so of 'Super 16'). Furthermore, it has been documented before that Shelley was appreciative of Can (see footnote).

'Sky Yen' also has a strong resemblance in sound and appearance, to the many stereo test records that were released in the 1970's to test bias and channel correction and phasing. In fact, the infamous 'Hi-Fi sound' (Howland West) featuring the 'needle' sleeve (which Stereolab stole for the sleeve of one of their own records) was released in 1974 and was packaged in a similar coloured sky blue sleeve to 'Sky Yen'.

Pete Shelley was always interested in the future. I remember writing to him and receiving back a letter explaining in great detail how the ZX Spectrum computer code containing an earlier graphics idea similar to todays' windows media player was transposed onto the vinyl edition of his later album 'XL1' and the studio effort that went into making this possible. When 'Sky Yen' came out in 1980, Buzzcocks' fans spoke about whether Shelley had lost the plot. He hadn't of course and was only following a similar lineage (in a more low key way) to the likes of Lou Reed (Metal Machine Music) and David Bowie (Low)......pop stars alienating part of their audience.

It's now thirty years since 'Sky Yen' was recorded and it's great to think that this 30 minute sound piece was composed by the same man that gave us the perfect 3 minute pop song.

oh...you were faster this time:)

Thank you very much...

Not sure how this slipped from my grasp for so long.

I consider everyone ought to browse on it.