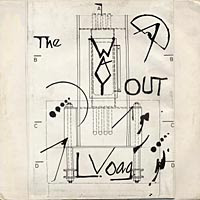 LINK HAS BEEN FIXED - NEW URL BELOW

It should be that calling a piece of music "punk rock" is much more specific than calling it simply "punk"; after all, the former term clarifies that this isn't classical, isn't jazz, isn't koto music. Yet mostly, the basic punk concept--- "I don't _want_ to pay for no goddamn lessons first!"--- was and is a rock concept, and the punkiest-sounding, most defiant efforts in other genres are, in fact, devised by people who've spent thousands, even tens of thousands, of hours becoming fully masterful at the traditions they wish to subvert. And L. Voag, at first, was yet another primitive driven to rock, leading the punk band The Homosexuals. But it didn't take him more than a year or two to ask himself "why can't a beginner-level jazz bassist, a bad clarinetist, a bad gypsy-violinist, an enthusiastic fledgling drummer or two, and an incompetent but versatile singer like me make jazz music?". It was a good question, and to judge by the evidence of this Wayside Music disc, he must've answered something like "because it would sound cruddy. But that's what studio tricks are for!".THE WAY OUT is a fairly quiet album anchored by thoroughly convincing, if simple, jazz bass and by quasi-jazz drums that are interesting because of miking oddities, weird artificial volume alterations, fake reverb or deadening applied for no more reason than "this sounds cool, eh?", cut'n'paste rhythm, and unusual choices in percussion: from snare to cymbal to tuned triangles to bicycle-bell to hospital beeping sounds to detuned banjo hits to pioneering equivalents of rap-music "scratching". Soft drones and tremoloes of many heretofore nonexistent types join in, and so does folky acoustic guitar. Altered vocal samples from unknown media are presented for sound rather than articulation (I especially like how "Franco's Prayer" alternates sung a capella, line by line, with what a swarm of insects would sound like if instead of buzzing they were arguing about sports at incomprehensible speed). But even at its most clamorous, say "Boxing And Sparring With The First Dimension" or whichever song has tuneful females singing "Hatred of all things fair! Destruction of nice hairdos!", every weird little element can be individually picked out, and plenty of songs allow tiny silences to crack their unpolished surfaces. Voag could quite possibly sing, but prefers to either squeak or intone like a Homer Simpson with less intellectual gravitas. It's entertaining that way, and this Mr. Science Blows Things Up Without Hurting Anybody approach to jazz does not require any previous appreciation for Miles Davis. Fortunately.

Originally posted on Insect & Individual, but the link is long dead.

Wow, I saw this recently on the insect & individual blog (RIP), and thought I would never get to hear it. Thank you very much for the post I look forward to hearing this. Cheers.

Hi, thank you. Used to own this back in the early 80s but could not appreciate it like today as I was too much into synth pop. As this is ripped obviously from the CD, why don't you give us the Move EP?

Also, Track 12 is missing, instead your posting contains Track 21.

ah, it is missing track 12...i'm sorry about that, i'm surprised someone didn't notice this sooner (as this is the same mp3 copy that was on I&I). i'll get it fixed as soon as i can (with the ep and other tracks too). thanks for pointing that out.